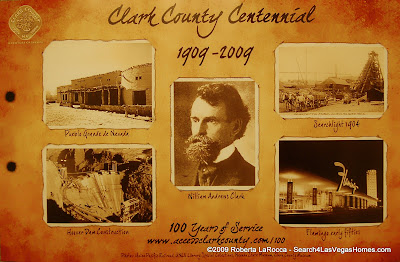 February 5, 2009, was the opening ceremony and reception for the Clark County, NV Centennial. It was held at the Clark County Museum on Boulder Highway, and hosted by District G Commissioner and Commission Chairman Rory Reid, and District A Commissioner Steve Sisolak. If Commissioner Reid's name sounds familiar, you may have heard of his father, US Senate Majority Leader, Senator Harry Reid. 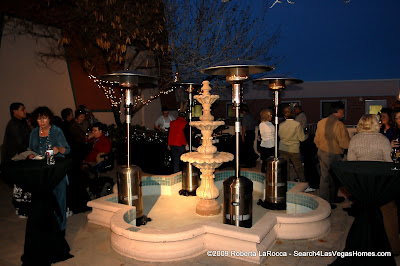 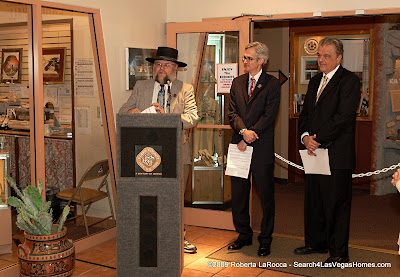 The catered reception began at 5:30 with food and drink available in the museum courtyard. After everyone had a chance to mingle, the gathering was addressed first by Rory, who mentioned that the year-long celebration wouldn't be including showgirls or fireworks. Instead Centennial Events will feature Clark County's history from it's very humble beginnings of mining and farming as it grew around the small railroad town of Las Vegas. He went on to add that a recent survey found that as a global brand recognition, Las Vegas is second only to Oprah. Steve added to the focus on the history and people that have made Clark County what it has grown into today, with an estimated population exceeding 2 million. I think this simple approach is to reflect more on the reality of life here in the valley, than the neon and glitz that have captured that global awareness. 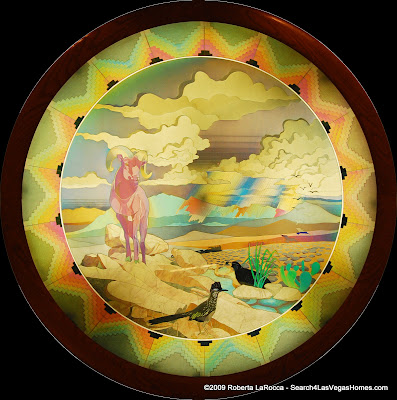 While so many know the 'brand' of Las Vegas, many of our near 40 million visitors have never actually been to Las Vegas. Yes that's right, if you haven't ventured north of Sahara on the Strip, you've never been. The Strip is actually in unincorporated Clark County, in the towns of Winchester and Paradise, and now with the resort corridor expanded to the south, the unincorporated town of Enterprise. That's just one of the misconceptions of Las Vegas. Another is often because of the limited view, as a good percentage of our visitors spend much of their time along the 4 miles of Strip. They miss what's hidden in the other near 600 square miles of the Las Vegas Valley and it's surrounds. From wildlife and the natural beauty of our mountains and desert, to the watersports of the massive Lake Mead, and just about every other form of recreation all to be found lurking in our communities. You can discover some of it my other blog posts, and the ones on Arts and Culture or Recreation might be a place to start. 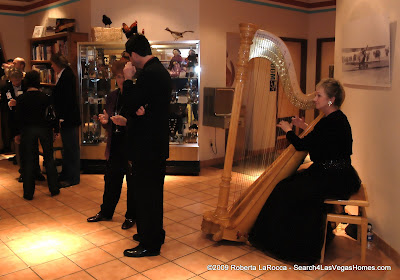 After the speakers, the museum's centennial exhibits were opened. In addition to the fixed displays that date back to the valley's evolution from ancient ocean to desert, there are several displays of memorabilia. Most of it was donated for use in this 100 year celebration. A harpist performed as the some chatted either while waiting to go through or as they prepared to go outside. The night also offered guided tours of each of the unique period homes of Las Vegas. Later this year is another Centennial event that will add to that outdoor display. The famous Candlelight Wedding Chapel that had been home to many weddings, including celebrities, will be added to the collection of relocated and restored buildings. You can find more about them, along with pictures, here in my post on The Las Vegas Homes of Heritage Street.

Hey, that was cool that you got to go to the centennial opening and hobnob with some of our local power brokers. Since I missed it I guess I won't make it for the next opening! LOL I have one question about the poster pic. Where is what is Pueblo Grande de Nevada???

Posted by Bob over 11 years ago

Bob: Yes it was a pretty cool event, taking part in the valley's history. I did get to 'lobby' some of our local politicians...or at least I had the chance to hang out with them in the lobby of the museum. :-). I don't think I'll be able to make the next centennial year event either! If either of us do, we'd probably be part of the display!

For your question, Pueblo Grande de Nevada is 'The Lost City', the archaeological find and museum to the north in Overton, near the Valley of Fire. The collection of ruins of the earliest know settlers of the region, the advanced civilization of the Anasazi Indian Tribe that mysteriously vanished from the area centuries ago.

I don't know if you've heard, but they believe they've located more of their dwellings at the Springs Preserve, using ground penetrating radar.