MGM Mirage Plans to begin the hiring process for their $9.2 billion dollar City Center on the Las Vegas Strip, beginning January 5, 2009. Information and registration for employment is currently slated to be available on that date at http://www.citycentercareers.com. At the moment the site is available to MGM Mirage employees. As some will transfer from other MGM Mirage properties, job seekers may also want to consider any job openings that may turn up at other locations.

From the heavy response to this post about MGM Mirage City Center Jobs, let me add some information. It's my understanding that all applications are being taken online at http://www.citycentercareers.com. The Career Center is open for Career Advisement and Interviews by appointment, as they have limited space for the volume of positions being offered. You can verify this, any changes to their employment process, or if you have any other questions by calling (for local job candidates) 702-590-2489, or (for out of town candidates) 1-866-909-2489.

For those that have appointments, there is an Events Page that has the map to the City Center Career Center on Frank Sinatra Dr. behind Mirage / Treasure Island. They also mention that they may be holding targeted career events there and at other Las Vegas locations, so you may want to subscribe to their email updates available on their website. Good Luck!

These hirings will be for the 4000 room centerpiece Aria Resort and Casino, Crystals shopping / dining / and entertainment complex, and the non-gaming boutique hotels of Mandarin Oriental, Harmon, and Vdara. Tenants inside Crystals will be doing their own hiring for retail and dining, and the all residential towers of Veer will also be handling their own staff employment.

The last released plan was for the project to open in staggered phases, beginning in late fall 2009. Aria Resort's tentative opening was slated for December of 2009. 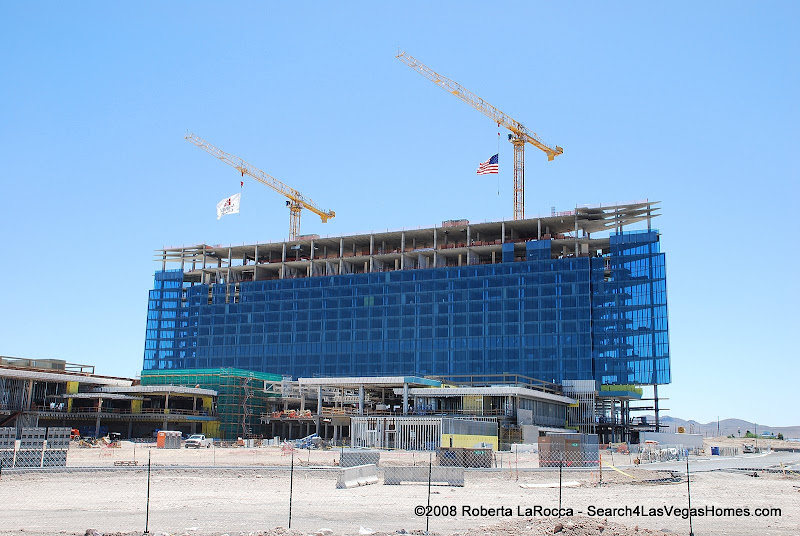 Currently in the hiring process is the $1 billion M Resort in Henderson, that is slated to open in March, 2009. It's a joint venture of Anthony Marnell Jr. and MGM Mirage. Hirings there are said to be near 2000, and you can register online at http://www.themresort.com/employment.html.

Two other resort properties on the Las Vegas Strip are also currently scheduled to open in 2009 - early 2010, although I haven't heard when their general hirings may begin. The estimated $2.8 billion Fountainebleau Las Vegas has had a handful of administrative positions at http://www.fontainebleau.com/StaticPages/hrlogix.htm. They have said that they plan to be hiring in the neighborhood of 6000 workers. Cosmopolitan Resort next to City Center is also currently scheduled to open first quarter 2010, but just like the building, their website at http://www.cosmolv.com is still under construction.

Always good to hear some positive employment news, even if it's long range. Adding to this, is historically these hospitality industry jobs have added employment in other sectors of the local economy. Impossible to predict the future, but at the moment this does appear to be a movement in the right direction here in Las Vegas.

If you are interested in relocating to Las Vegas or would like information on Las Vegas real estate, please email me, Roberta LaRocca, at roberta@search4lasvegashomes.com, or call me at 702-354-8988. I look forward to hearing from you!

Thanks so much for posting this job info!!! MERRY CHRISTMAS TO YOU!!!

Posted by Naomi Kimball about 11 years ago

Naomi: Glad to pass it along and hope it helps! Merry Christmas to you!

A lot of people all over looking for work. Good thing Vegas had all this going before the economy took a dive. Some can moan and complain about the imploding of old places but these jobs are what it's all about. Don't think it will be long before we have the really big numbers moving here again.

Posted by Bob about 11 years ago

Bob: It's great that these were happening. If not, imagine the thousands of jobs that wouldn't be. Keep that pipeline going and I think you're right, there will be more moving here.