There is not a housing shortage in Las Vegas......yet, but according to an article in "In Business Las Vegas"   the local and respected consulting firm Applied Analysis is predicting there will be a work force housing shortage by 2009.  The report was done for the Southern Nevada Home Builder Association last month, and may partially explain a 114% jump in residential and a 211.9% in commercial permits in November.
Another analyst firm, Restrepo Consulting, is also doing a study on this same scenario to see if it will really unfold. With the $30 billion in construction just on the Vegas Strip, I'd imagine they'll come to the same conclusions.
According to Greater Las Vegas Association of Realtors®, there are a little over 30,000 homes, townhouses and condos on the market today.  Some analysts predict that because of all the resorts opening on the Strip, the tens of thousands of jobs created will cause people to migrate to Las Vegas.  This will obviously create the need for more homes.
Despite all the talk of Las Vegas foreclosures that have been in the media, there's another interesting sign that the local market may have bottomed out or is close to it. Inventory has been slowly shrinking for several months in spite of a sluggish market with these REO's added to it. 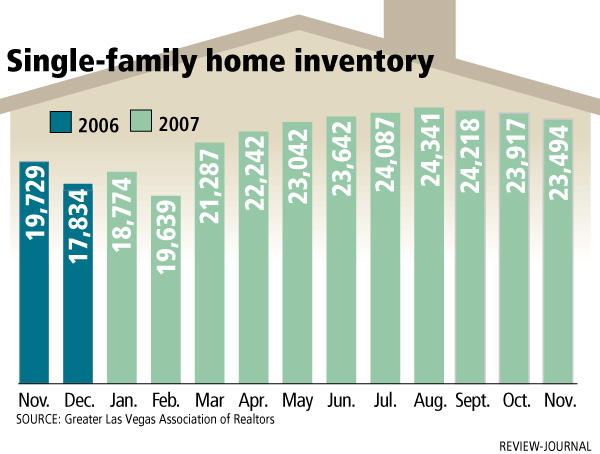 That being said, now is the time to buy especially if you are looking for a good deal!  There is still a large selection of homes at great prices......but they may not last long.
If you are interested in relocating to Las Vegas or would like information on Las Vegas real estate, please contact me here

That would be very good for Vegas and would help to show the rest of the country the market is slowly returning.

I posted a blog recently talking about what to believe and what not to. Isn't it funny how one "report" says one and another has the opposite opinion?  I wish I could run around and steal the bad articles so that buyers know NOW IS THE TIME TO BUY! :)

Have a good day!

Posted by Heather Paulette-Cooper (keller williams realty) over 12 years ago
Roberta- Here in Central Florida prices have started to level off. I think the bottom is near. Buyers need to get off the fence. It's not getting any better.
Posted by Mark Horan, "The Resident Chef" - Resident Team Realty LLC & (Resident Team Realty, LLC & Toni's Property Management LLC) over 12 years ago
Its all about hype. The worse things are, the better the ratings are with news outletts. Where are the "lowest rates in 2 years" articles? Buy when everyone is selling, sell when everyone is buying... makes sense to me!
Posted by Jeff Fullmer, Real Estate Investor/Financier (FM Properties) over 12 years ago

Jeff:  I agree, it would be great!

Mark:  You are right, buyers do need to make a move now.

Posted by Roberta LaRocca, REALTOR®, Broker, Salesperson, NV. Lic BS.507 (Simply Vegas Real Estate) over 12 years ago
Roberta - Sounds like a wonderful market to be in. Hopefully the rest of us will be right on your heels!

Not only will that bring construction jobs, but when the resorts open there will be thousands of jobs with the resort. Have they announced when they expect to open them?