Nevada Day is almost here. It's the state's holiday commemorating it's entry into the Union on Oct. 31, 1864. It was originally called 'Admission Day' and was later switched, as was the day of the holiday. No longer on Halloween specifically, but the last Friday of the month to make a long weekend. There are parades and many events in Carson City, and even a tradition here in Las Vegas.

OK, so who is sometimes affectionately known as 'Loonie Lonnie'.....and is he really? Well, I'll let 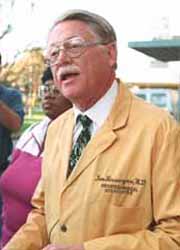 Lonnie is a Vietnam Veteran, Army Airborne combat flight surgeon with over 100 missions. He later became a flight surgeon to the Apollo Space Moon Program and would have been selected for space flight, but unfortunately his vision didn't pass their 'muster'. He was on duty when astronauts Grissom, White and Chaffee’s Gemini spacecraft burned on the pad. NASA had used a pure oxygen environment in the capsule, against Lonnie's and the Flight Surgeon's office recommendations not to do so. 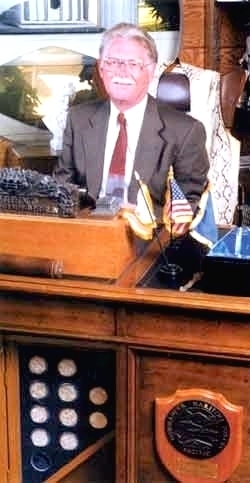 After leaving the military he studied neurosurgery at the Mayo Clinic, and later the first micro neurosurgeon in Las Vegas. He became known as the surgeon of the stars, especially those in the boxing world. His community involvement grew and this holder of 5 college degrees became involved with education, and elected to the Nevada Board of Regents. He eventually landed in politics, and he became Nevada's Lt. Governor from 1995 - 1999. Among his many accomplishments in office was working to establishing more flights to the Pacific Rim nations, and helping to bring about 'The Extraterrestrial Highway', famous for UFO sightings near Top Secret Area 51.

So, nothing really crazy about that, he's a brilliant man that..........just has an unusual passion. He collects things. All kinds of things. Nevada, Las Vegas, space, astrology, science, medicine, history, and well, just about anything that happens to catch his eye. It seems he may have acquired this from his mother 'Ruby', who was also a 'pack rat' and a flamboyant woman who enjoyed living life 'her way'. Her picture adorns the front of the book 'When I grow Old, I shall wear Purple', the 'Bible' for the ladies of the Red Hatters. a social group of women that love to have fun. Even their newsletter is called 'Ruby's Ramblings', the monthly publication of 'The Red Hat Society'.
This Vegas legend and colorful character had moved to Las Vegas to start his practice in 1971. He purchased a home on the east side in 1972 and began his menagerie. As his collection grew he needed more space and eventually bought two homes next door. The complex was expanded and remodeled to suit the needs of his collection, adding a floor here or an opening there, until every nook and cranny of the 12,500 sf has been filled with his collectibles......or as his wife Sandy calls it......junk.

Things like Showboat Casino sign for the outdoor stage, mining trains, Bugsy Siegel's stained glass skylight chandelier from the Flamingo, the railroad car used to sneak Howard Hughes into Las Vegas, a Liberace traveling piano and his staircase, even one of the trains from the High Roller Coaster that had been on top of the Stratosphere tower. There is SO much there, I couldn't begin to list it all. As far as that goes, even though I've been there several times, I don't think I've seen it all. Every visit leads to a new discovery.

Yes, everything imaginable, and then some, can be found in Castillo Del Sol, or The Hammargren Home of Nevada History.

The home(s) have been visited by countless celebrities over the years. You may have even seen this home, since it was featured on Robin Leach's Lifestyles of the Rich and Famous several times. More recently it was featured on Discovery Channel's 'Most Interesting Homes in America', and HGTV's 'Offbeat America'

How does this all fit into Nevada Day? It's been a tradition in Las Vegas for Dr. Lonnie to hold an open house for the public each year for Nevada Day. He doesn't charge admission, only requests donations to charities. Besides touring the eclectic collection, there is also free entertainment and you can't keep the loveable down to earth Doc from jumping on stage to play and sing.

This year's invitation is Here.

I guess I should add one more interesting story about this Las Vegas icon. Last year, for the first time that anyone can remember, Lonnie had to cancel his Nevada Day Open House. He had to undergo bypass surgery and that event caused him to realize his own mortality. So, Lonnie being Lonnie, he held his own funeral, so he could enjoy it with his many friends. Called 'A Wake While He's Awake', that included a memorial service, a New Orleans's style funeral procession, a party at the house, and 'interment' in his Egypt ion Tomb. Only Lonnie, and only Las Vegas!

Hi Roberta,
Nevada Day sounds like a good celebration and Loonie Lonnie sounds like quite a character.  Have fun!