Who would believe that Las Vegas, in the middle of the desert, with construction everywhere, that you can go to the orchards and pick fresh fruits and 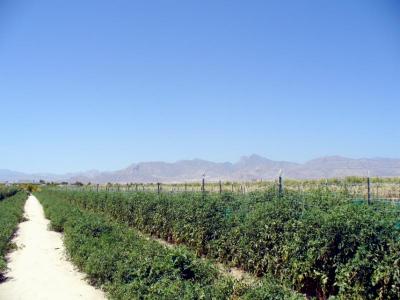 vegetables off of the vine!  It's true!  In the far northwest corner of Las Vegas sits over 50 acres with more than 600 apple, peaches and pear trees.  In the summer, there is a variety of vegetables including squash, tomatoes, cucumbers, peppers and pumpkins.  It is the most amazing sight to see rows and rows of crops in the middle of the desert.  You feel like you are on a farm in Ohio or Arkansas. Then comes the fun part, you pick your own fresh fruits and vegetables.  They also sell their own delicious apple cider, made right there on the farm.

This is  Gilcrease Orchards .

For over 25 years, they have sold Southern Nevadans fresh produce.  The admission to get in is $2 for adults and $1 for children.  They are open Tuesday through Sunday 7AM to Noon.  Get there early for the best selection!  They are closed in the winter months.  You pay for the produce on your way out, which is just a fraction of what the cost would be in the grocery store.  So, for those people who have grown up here in Las Vegas, it would be quite an experience to pick their own fruits and vegetables.  For those who have moved here from a farming town, it will be like a taste of home. 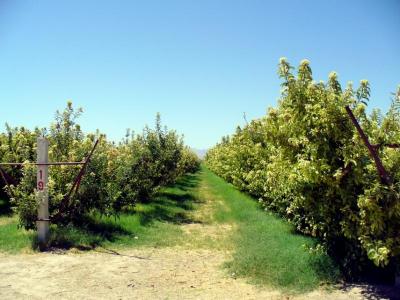 Now for a little history about the Gilcrease's.  The family, who originally bought the farm in the 1920's, owned about 1500 acres in the northwest valley. The farm supplied almost half the chicken eggs used in Las Vegas through the 1940's. After that, they moved on to alfalfa and grains.  It wasn't until the late 1980's that they began to grow fruits and vegetables. Over the years, some of the land has been sold for construction around the orchard, including houses and schools.  This was also necessary to finance the orchards.  Bill Gilcrease and his late brother John (Ted) had set up a  nonprofit foundation to sustain their legacy.  Ted's wish was to have a place for people to come and pick fresh produce because many told him that it was an important form of recreation for them.  Ted Gilcrease died in 2003 at the age of 87 and left behind a trust to support the orchards.

This is also a family operated nonprofit organization, that accepts and cares for all types of animals and allows the public to view them. Bill Gilcrease, now 88 years old, has focused on taking care of the animals in the sanctuary. It is on about 4 acres of land with room for expansion and plans for the future.  Of course, that depends upon donations.  Visitors to the sanctuary get to see a wide variety of birds from all over the world......with over 1000 birds! These include Polish chickens, white peacocks and African turocos and many more.  There are even geese that have made their home in an open pond area.  The sanctuary includes a petting zoo that has such animals as pigs, goats, borrows, ostriches and llamas.  One of the newest additions to the facility is a rainforest exhibit which is a climate controlled enclosed structure that allows the macaws to roam free.  The unique feature here is that the visitors are in a 'cage' to view these magnificent specimens. All this gives people a chance to see some of the most beautiful birds in the world.  Gilcrease says the birds are very happy here because they are treated very well.  Most of the birds were a pet or in a household where they were abused.

The facility depends on volunteers to keep a friendly and clean environment for the animals.  They also have Boy Scout groups that do a lot of the work for them.  They would like to have more help, but just can't afford it.  The sanctuary relies on donations of unused breads and produce from local stores to feed the animals.  It takes a lot of food for this many animals!

If you would like to visit this amazing place, it is open from 10 AM to 3PM, Wednesday through Sunday.  The fee is $4 for adults and $1 for children.  Bill Gilcrease hopes that children and families visit and learn about animals.....and it's just one more thing most people don't know about from the 'other' side of Las Vegas. There's much more to it than the casinos and glitz you see on TV, and this is just one more example why it's really a unique place to live.

Loads of info here for the Vegas relocater! I sure would like to run around the orchards and get my pick and then drive up to the sanctuary to see all the wonderful animals! Thanks for sharing Roberta!
Posted by Celeste "SALLY" Cheeseman, (RA) AHWD CRS ePRO OAHU HAWAII REAL ESTATE (Liberty Homes) over 12 years ago

Jon: I actually just found out about the orchards this past year.  I have told a lot of locals about it and they didn't know either.  It is so nice to have fresh tomatoes, they are my favorite!

Sally: I love to share all the "hidden gems" here in Vegas.

Thanks for this great article.  Now to make vacation travel plans to see this...