Of course no one has a crystal ball and can predict what will happen. If we did, we would have bought that winning powerball or my name would be on Trump Towers or Wynn Las Vegas. The only thing we can do is look at what is on the table at the moment and see what indicators, good or bad, are out there.
You'll see those disclaimers about 'forward looking statements' and 'past performance doesn't indicate future'. That is true, but what do you use? I ask because I've also been hearing some say "Wait for the Vegas housing market to bottom out". When will you know that? Inventories shrunk and prices steady on the rise? Sounds like you've missed the 'bottom' and have limited your selection. Perfect market timing is almost impossible to predict.
With all the bad press about real estate out there, and of course as a leader in the boom Las Vegas comes up quite a bit since it's name is an attention getter, let me pass along some of the things that get overshadowed by it. Las Vegas currently has the largest commercial investment in it's history, with $30 billion in construction just on the Las Vegas Strip set to open over the next few years. Palazzo @ Venetian, Encore @ Wynn, Cosmopolitan, Project City Center, Echelon Place, Turnberry / Packer PBL's Fountainbleau currently under construction and more on the horizon. Some new players are Dubai World investing in MGM's Project City Center and a new project on the north Strip with Bahamian Kerzner International, owner of Atlantis.
In Business Las Vegas
Hotel Online
With that investment going on there will be another surge in employment, but on a much larger scale from 2005 when Wynn Las Vegas opened the first new property on the Strip in 5 years hiring 9,000. That was followed by South Coast (now South Point) and Red Rock Resort.  This current phase has been estimated by Deutche Bank to bring another 113,500 hospitality jobs by 2012, and that was before several other projects were announced or include the other projects around the valley.
Las Vegas Review Journal
Las Vegas has a limited land supply available, being surrounded by mountains and federally owned land. It's estimated that just a current rates, the land could run out in 7 - 10 years, escalating prices through supply and demand. The need for additional housing has had MGM demolish it's Nevada Landing casino in Jean NV to the south, and new master planned communities are also coming on line, like Harvey Whittemore with Coyote Springs, a master planed community in the early phases 50 miles to the north of Las Vegas. The project is designed to build as many as 160,000 homes within the next 30 - 40 years.
Nevada Landing @ LVRJ
This is what is just some of what is currenly in store for the future of Las Vegas.

Very informative post. I do have a question about the comment "the land could run out in 7 - 10 years" I just can't see that. I've been to Vegas twenty times and there's so much land it's hard to imagine running out. I would say water would run out first. What are your thoughts.

Very informative post. I do have a question about the comment "the land could run out in 7 - 10 years" I just can't see that. I've been to Vegas twenty times and there's so much land it's hard to imagine running out. I would say water would run out first. What are your thoughts.

Mike: Las Vegas has two things that limit the available land. One, the mountains that surround it, two the federal government. The Bureau of Land management controls much of it with various designated wildlife preserves and conservation areas. They include lands for the desert tortoise, wild mustangs and burros, and natural areas like Red Rock and Sloan canyons, and the Lake Mead Rec area which alone is about the size of Rhode Island. Congress has allowed a limited amount of land to be auctioned, and once that is used it would take another act of Congress to grant more.

Beyond that you have the Nellis Range which is the premier international training area for desert warfare with their 'Red Flag' excesses, and of course the Nevada Test Site.

If you look at this map, the white areas indicate land available for development, so while a lot of wide open spaces surround Vegas, it's already spoken for. With the drought a wakeup call for all the western states, it only adds to the reluctance of the government to release more land, even as the Southern Nevada Water Auth. makes provisions and agreements for water banking and pipelines. 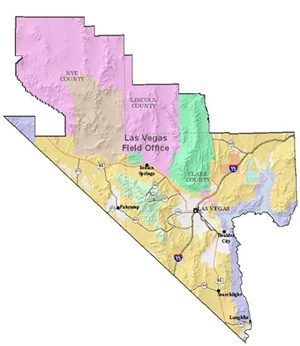 Wow. You really cleared that up. I now see what you mean. Thank you for taking the time to spell it out for me. I'm a picture person so the map really shows what you mean about lack of land to build on. Thanks!