Many visitors think of living in Las Vegas as the 'Wild Life'. Their brief stop at a very small 4.5 mile 'Strip' of land often gives them a limited view of all that Las Vegas has to offer, and there is much more. Yes, you can experience the other wildlife found in and around the valley. From what you might find in the luxury homes of McDonald Highlands, to this guy on my trip to Boulder City to ride the rails. 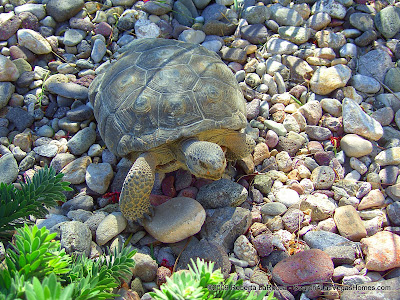 I've posted about the Santa Train of the Nevada Southern Railway held the first two weekends of December. Of course there are rides available on weekends through most of the year at this train museum and restoration facility that's an agency of the Nevada Dept. of Cultural Affairs.

The equipment is donated or acquired by the state, but most of the work comes from volunteers for both the maintenance and operation of the train. The meticulously restored cars are comfortable, with three air conditioned Pullman coaches and one open-air car. There are other cars and engines to be seen, all in various states of restoration. The friendly staff is eagerly available to answer questions about the train, others cars on static display, and what can be found along the way.

The spur is part of the original line built for the construction of Hoover Dam. As you'll see from the pictures, parts of it were cut out of the rock. That's a small idea of the massive project to construct the dam in Black Canyon with the much less sophisticated equipment of the time. The colorful rock formations also show the unique geology of the Las Vegas Valley. Evidence of it's beginnings as an ancient ocean and it's long dormant volcanoes all mixed into the abundant mineral deposits seen in the many different colored layers and formations.

In the spring, you also have the added colors of the wild flower blooms. Desert plants that grow in the most unusual places, even right out of the rock, that can produce amazing flowers and colors. The cactus blooms are especially amazing. These plain and often unusual looking, thorny plants can produce beautiful flowers that look like roses, and in such vibrant colors.

Other sites along the way include the exclusive Cascada Golf Course and it's waterfall that not only runs down the mountain, but it's stream flows through the clubhouse. The mirage-looking 'lake' in the southwest of the massive Eldorado Valley is actually the Solar One solar-thermal power plant. The hiking and biking on the paved 35 mile River Mountain Trail that runs from Henderson to Lake Mead. The Nevada Veteran's Home is nestled into the foothills just below a large round VOR antenna (VHF Omni-directional Radio Range) used for aircraft navigation. (Yes, I have pilots in the house.) There's also the Boulder City Airport that is not only home to many general aviation aircraft, but many of the Grand Canyon tours plus skydivers that you might see during your train ride.

The end of the line is at Railroad Pass, and the casino of the same name. It began as a dance hall for the workers of the dam. It's home of the oldest continually active casino license in southern Nevada, and sits just outside the limits of Boulder City. Gambling was banned from the government town, and it remains that way to this day.

Railroads played a huge part in settling the west and in particular Las Vegas. With all the mining in the mineral rich Silver State, trains with supplies and workers were brought in, and minerals taken out, so the rails were the key to development. For what was to become Las Vegas, it had water in natural artesian springs that was needed for the steam engines. In 1905, the railroad had a land auction at the water stop in the desert. That land was the Las Vegas townsite that became a city in 1911. It's what began the valley's growth to an estimated 2 million in just over 100 years.

Whether you're interested in trains, the desert ecosystem, it's geology, history, or just taking a step back to the relaxed times of travel by rail, Nevada Southern Railway is worth a visit. If you click on the link you'll find their schedules, more information including their Cab Rides, Engineer for a Day, Birthday Parties and other charters, and their current coupon for $1 off Adult Fares.

Now it's 'All Aboard" for the picture tour of the Nevada Southern Railway. To watch full screen, instead of using PLAY, click the HD or Full Screen button on the bottom of the player below, and when finished click it again or use the ESC key to return.

The XML Flash player NOT embedded in your current posting location? Click here to view these pictures , or for all my Las Vegas Photoshows that include some of the interesting neighborhoods and other community activities found in and around the Las Vegas Valley, CLICK HERE.

These pictures are also available as higher quality large images that are downloadable in my Picasa Photo Album.

Roberta- I think your post is wonderful and I really love Boulder City in Nevada.

Posted by Robert Vegas Bob Swetz about 11 years ago

Bob, I really enjoy the charm of Boulder City, and thanks for the feature!

Posted by Roberta LaRocca, REALTOR®, Broker, Salesperson, NV. Lic BS.507 (Simply Vegas Real Estate) about 11 years ago
Great pics! Love the tortoise pic too. I did the ride a few weeks ago since you did the other post on it. Cool trip and like you said everyone very friendly and answered questions and pointed out the sites. Your first post must have helped the santa train. I think they said they had something like 9,000 riders on those 2 weekends!
Posted by Bob about 11 years ago

Bob, Glad you enjoyed your NSR trip and these pictures! It's an interesting ride and the crew is informative and friendly. I hope my post helped them with the Santa Train, it did have several thousand views.

Roberta- Your very welcome my friend and my brother from the Midwest is thinking of moving to Boulder City because ti's close to Lake Mead and much quieter then Vegas.

Posted by Robert Vegas Bob Swetz about 11 years ago

Robert, glad you enjoyed it, and it's a great little town.